U.K. Prime Minister Boris Johnson apologized on Wednesday after admitting he attended a “bring your own booze” Downing Street garden party in May 2020, saying he believed that it was a work event at the time.

Addressing lawmakers in the House of Commons, Johnson said he wished to apologize for his actions and said he knows there are people who feel rage toward him and his government over the so-called “partygate” scandal.

“There were things we simply did not get right and I must take responsibility,” Johnson said.

The prime minister conceded for the first time that he had attended the Downing Street garden party on May 20, 2020, claiming he had thought the gathering to be a work event at the time. He added that in hindsight he should have sent everyone back inside.

Keir Starmer, leader of the opposition Labour Party, accused Johnson of “months of deceit and deception” and led calls in urging the prime minister to “do the decent thing and resign.”

Starmer also described Johnson’s defense that he did not realize the event was a party as “so ridiculous that it is actually offensive to the British public.”

In response to numerous calls to resign — from Members of Parliament within the ruling Conservative Party and opposition lawmakers — Johnson said he did not think he should pre-empt the outcome of an internal investigation led by senior government official Sue Gray.

The email invited more than 100 Downing Street employees “to make the most of this lovely weather and have some socially distanced drinks in the No 10 garden” from 6 p.m. on May 20, 2020. The message was sent at a time when lockdown rules in England banned large outdoor gatherings.

Reynolds signed off the email by inviting staff to “bring your own booze!”

Less than an hour before the Downing Street garden party was scheduled, then Culture Secretary Oliver Dowden delivered a daily Covid press conference to remind the public that they must only meet in pairs outdoors.

Sky News reported the prime minister and Carrie Johnson were both seen with about 40 staff in the Downing Street garden on May 20. Johnson’s spokesperson has refused to comment on the details.

It follows a string of other allegations regarding rule-breaking parties at Downing Street by Johnson and his officials and a host of other separate scandals, including the government’s awarding of lucrative Covid contracts and the refurbishment of Johnson’s Downing Street flat.

Angela Rayner, deputy leader of the Labour Party, has suggested that if Johnson was at the party, and he had lied about it, his position would be “untenable.” Rayner has also called for the Metropolitan Police to investigate the claims. The Met has said it is in talks with the Cabinet Office.

Beginning of the end for Johnson?

“It is important to note that this isn’t the only source of disillusionment within the Conservative Party over Boris Johnson’s leadership,” Matthew Goodwin, a professor of politics at the University of Kent, told CNBC’s “Street Signs Europe” on Wednesday.

Goodwin cited dissatisfaction among Conservative backbenches about what they see as a failure to make the most out of Brexit, disquiet over the move to raise taxes and an absence of strategy when it comes to “leveling up” — Johnson’s often-used political slogan referring to his bid to improve infrastructure in northern England.

Turn to CNBC TV for the latest stock market news and analysis. From market futures to live price updates CNBC is the leader in business news worldwide. 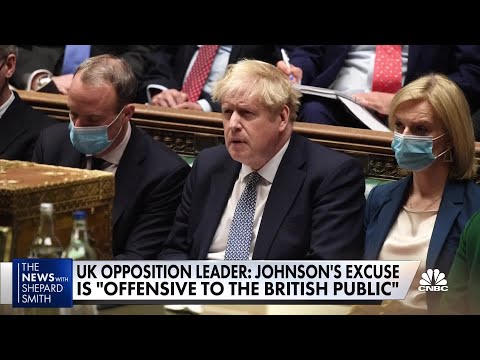